Book Review, Excerpt, and Giveaway: The Tainted Love of a Captain by Jane Lark 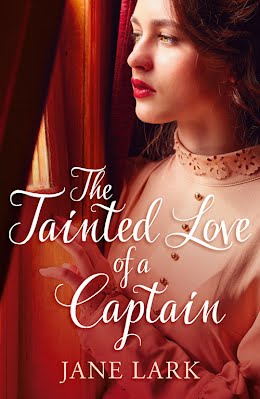 
A sensual, heartbreaking, romance
The sounds and scents of the Crimean War are strangling Harry Marlow, shutting him off and silently smothering his soul. But he is a soldier and that is his life, and he can see nothing else besides that. So why should he care when a woman watches him? His life is not one to share with a woman, other than for a few moments in his bed.

When a woman is already drowning so deeply in sin she is without any fear of judgement - what can it matter if she chooses to begin a new affair? It is like escape to choose her own man and Captain Marlow is the perfect candidate for a dalliance. All she has to do is obtain an introduction...

Review: Harry Marlow is a soldier returned from the hardships of the Crimean War and stationed at Brighton. On the beach, he meets a young woman, Charlotte Cotton, and the two gradually become friends. Charlotte is being kept by a retired Colonel, but Harry becomes more and more enmeshed in her life regardless of the impact on his career.

This was an interesting book. I don't read a lot of Victorian romances, and the era is certainly different from Regency or Medieval romance stories. I found it a little slow in places because of some repetition; the reader is told over and over that Charlotte is a fallen woman, for example. I liked that Harry comes to understand what his father and brother have been preaching to him about fallen women through his relationship with Charlotte. I also liked that Charlotte comes to learn that her sacrifice was really for naught; she grows up as she understands that what happened to her was not her fault.

Harry's family are a fascinating bunch of people. Not having read the previous books, I was confused by names and titles, but it really doesn't matter to this book and mirrors some of Charlotte's confusion. Charlotte uses the nickname 'Charlie' through much of the book which just a personal quirk, but I thought was too modern. Still, I enjoyed this story; I was given the book as an ARC for an honest review.

Jane began her first historical novel at sixteen, but a life full of adversity derailed her as she lives with the restrictions of Ankylosing Spondylitis. When she finally completed a novel it was because she was determined not to reach forty still saying, I want to write.
Now Jane has been shortlisted for three reader awards, and become a bestselling author in the UK and the USA.


She was there, with her maid. They were on the path at the head of the beach, a few yards away. He crossed the street. She walked towards him and intercepted his path. ‘Captain Marlow!’ she called. ‘Well met!’ She spoke as though she had not written and he therefore presumed the maid did not know that this interchange had been orchestrated.

He bowed, slightly. ‘Miss Cotton.’ What was the etiquette for a man’s mistress? He knew how to behave with whores and with respectable women, but a mistress was somewhere in between. ‘Would you care to walk with me?’ He lifted his arm, in the way he might have offered his arm to one of his sisters or cousins.

The maid held back to walk a few paces behind them as Ash looked up at him with eyes that asked why he had not walked on to the pebbles. Harry clicked the fingers of his free hand and tapped his leg to tell Ash to stay at his side.

‘I like your dog. What is her name?’ Miss Cotton said loudly. He presumed for the benefit of the maid as much as for an answer.

She looked at him as though the fact that he might have a niece was a bizarre thought. ‘Oh.’

He smiled. Her colour had been high since the moment they had faced each other, but now it became even redder.

‘Your dog has a very pleasant nature.’

‘I am glad you came,’ she said in a quieter voice, leaning closer to him as he’d seen her do when she spoke to her maid. ‘It took me so much courage to write. But you have never looked at me here. Then you looked at me last night and I wrote in a rash moment because I have had a great desire to know the man with the lovely dog. I hope you do not think me too forward.’ Her back straightened when she had finished her conspiratorial whisper and her chin lifted high. There was a sense of dignity in her posture, no matter her status.

‘I was not sure that I would come.’

Her head turned and she looked at him about the rim of her bonnet, her fingers pulling on his arm a little. ‘I admire you as much as your dog. I have wanted to meet you as well as Ash.’

‘I am aware. I have seen you watching me.’ He breathed in. ‘It was flattering.’ He had not thought so a day ago and yet having seen the woman up close. Yes, the interest and attention of such a beautiful woman was flattering. Her large, expressive eyes, within the shadow of her bonnet’s brim, were particularly fascinating and the curls of her vibrantly coloured hair peeked from beneath the edges of the bonnet, providing a temptation to touch it.

She smiled. ‘I think it is lovely how you play with the dog. There seems such regard between you as you play. So, yes, I have been watching your games and admiring you and your affection for Ash, from a distance. It is very charming to watch. Your friend has looked back at me, but you have no more than glanced. You have given me no opportunity to compliment you before.’

‘I thought you were…’ He had been about to insult her and say that he’d thought her respectable, which would tell her that now he thought she was not. ‘I thought you someone different.’

‘No one in particular, simply a young woman looking for a husband and I would make a poor candidate for that.’