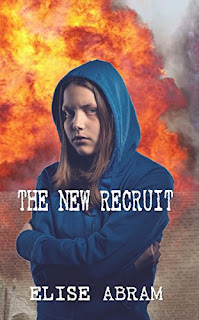 When sixteen-year-old Judith meets Cain, she has no idea what she’s getting herself into. Cain is the most beautiful human being Judith has ever seen, but he hides a dangerous secret. When Jo-Jo, Cain’s surrogate father, offers her a job, she accepts, unaware she’s been recruited as a pawn in Jo-Jo’s ecoterrorist plot. THE NEW RECRUIT is a timely story, exploring how, without love and support from those around them, our disenfranchised youth can be so easily misguided.


Review: Judith is the new girl at school. She's just come from an all-girls Jewish high school and doesn't fit in very well. But she makes a new friend right away and then meets a handsome older guy named Cain who recruits her for a job delivering packages. She finds out he is part of an eco-terrorist cult run by a charismatic leader named Jo-Jo, and that's when the trouble starts.
This YA story is a quick read. It is part of a proposed three-book series and ends on a cliffhanger. I'm not in the target audience, but I'm not sure how many YA readers will enjoy this story. It's written more for the parents of those YA readers with a lot of warnings about disenfranchised youth and the signs to look for.
It also contains a lot of YA tropes: it's written in first person POV, the heroine is the 'odd' girl with the funny sidekick, the hero is impossibly handsome who still 'falls in love' with the odd girl anyway, her mother is dead, they're fighting against the establishment, and so on. Judith, or Jude, is unbelievably gullible and won't listen to her father's advice while still giving a pass to Cain's obedience to his father figure, Jo-Jo.
It's very well-written and I did enjoy the book. My issues with it have more to do with my own personal reading preferences right now.

Link to Amazon
Posted by AntrimCycle at Monday, July 03, 2017