Book Review: Once Upon a Long Ago by Sharon Booth 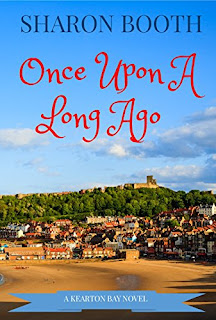 Lexi Bailey and Will Boden-Kean have both appeared in the previous Kearton Bay books (it is not necessary to read those before this book but you should because they're fabulous). Will is now a Baronet and fully in charge of his family home after his father's death. Lexi works there now as they try to make the Tudor mansion into a profitable venture. However, complications abound. Will's cousin Nat shows up, a handsome bounder who connects with Lexi much to Will's dismay; Will has been in love with her forever and is patiently waiting for her to realize it though Lexi doesn't want a relationship, having seen her parent's bad marriage. She fine with simple sex with Nat who has his own plans for Will's inheritance.
I was happy that many of the characters from the previous books appear here as well as some new and interesting ones. Will is just a sweetheart though he's not a milquetoast either. Lexi is a bit immature in my opinion but she grows up over the course of the story, and I admit that I cried at the end. One of the many things I like about Ms. Booth's writing is that the characters are 'real' which means they don't always act as I might expect. They're individuals and Ms. Booth doesn't follow expected story lines but includes many an unexpected yet believable twist. For example, I thought I knew where the treasure subplot was going, but Ms. Booth wrote it in a much more satisfying way.
I only finished A Kiss From A Rose yesterday and fully intended to break away from this series so that I wouldn't read it all too soon as I don't want it over with, but I had to read Once Upon A Long Ago once I read the blurb. I stayed up way too late, but I'm so glad I did and that I found this author. I've been gushing about these books and author because I love the books and think many of my friends would enjoy them.
One point for American readers: these books are written and edited in English style. They're also set in Yorkshire (Kearton Bay is a fictional name for the very real Robin Hood's Bay) and the dialect reflects that setting. I hadn't come across a few phrases or words, but I could usually figure it out from the context. In my opinion, it just makes these books more unique and charming.

Link to Amazon
Posted by AntrimCycle at Friday, July 14, 2017

Email ThisBlogThis!Share to TwitterShare to FacebookShare to Pinterest
Labels: book reviews, Once Upon a Long Ago, Sharon Booth