Cover Reveal: Nessie and the Hourglass of Time by Angelique S. Anderson 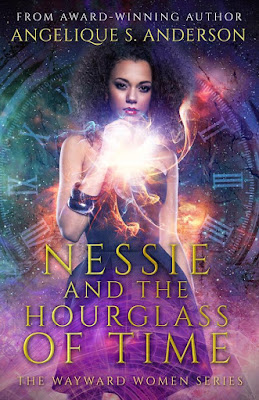 In an alternate New York City, a place overrun by beasts called the Golems, spunky Nessie yearns to escape the underground bunker she lives in with her friend Calvin. Running out of time before they are discovered, their only hope is to escape New York and rid themselves of the Golem’s control forever. The problem is, the Golems senselessly slaughter anyone who does not follow the rules, and their human to stone form makes them nearly impossible to escape.
After running from them nearly her whole life, and seeing them kill and maim without reason, it’s certain that Nessie or Calvin could become their next victim. A chance encounter with a magical stranger, who makes Nessie question everything she believes, will guide her to what can stop the Golems forever. Excited to fulfill her destiny, a sudden loss almost stops her from facing the challenges to come and accepting the adventure that awaits.
In a tail of time-travel and magic, mermaids and beasts, will Nessie be able to fulfill her destiny in time?
Posted by AntrimCycle at Friday, September 21, 2018