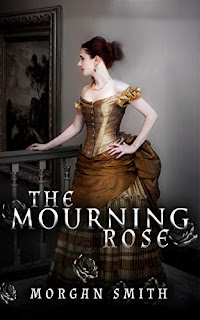 If you like the books of Mary Robinette Kowal or Emily Larkin, you'll love The Mourning Rose. It's a gothic historical with a bit of magic to enhance the romance.
Polly, or Polyantha, almost had a romance but her suitor died unexpectedly. Now she's invested in her cousin Eglantine's season. Eglantine is expected to make a brilliant match, and the leading contender is Lord Valremer. He's a confirmed bachelor who seems suspiciously (to Polly) interested in Eglantine.
Meanwhile, a disreputable smuggler named Mad Jack is overly interested in Polly and her cousin, much to Polly's dismay and delight.
The magic isn't a big part of the story. It consists mostly of the girls learning to serve tea magically or glamours of fireworks at a ball. Valremer uses darker magic which adds to the gothic element of the story. I really liked the romance of Polly and Mad Jack. They are both fun and interesting characters, a bit different from the usual members of the Ton. The other supporting characters enhance the story, especially the despicable Mrs. Anwing who is Valremer's confederate.
The writing flows at a fast pace which keeps the reader invested. I wanted to know what happens next at most every chapter. And I definitely would read further adventures of Polly and Jack.

Link to Amazon
Posted by AntrimCycle at Thursday, September 20, 2018