Book Review: Keeper of the Bees by Meg Kassel 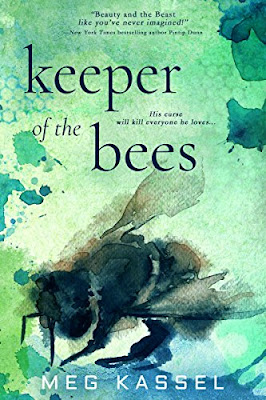 I'm just going to start with how much I love this book, maybe more than Black Bird of the Gallows, but not by much as that was awesome also. This is a stand-alone continuation of that story; you don't have to read Black Bird of the Gallows to enjoy this book, but you should anyway.
Dresden is a beekeeper, an immortal remnant of a world where magic once existed. He carries his bees inside his chest, letting them out to sting bad humans; the venom makes them insane and murderous before they succumb. Dresden follows harbingers, people who transform into crows and follow catastrophes. Oh, and Dresden also has an ever-changing face, a compilation of the many people who met their deaths from his bees.
He shows up in a town in Missouri where he meets Essie, a girl with her own issues. She is consumed by the Wickerton curse, a genetic insanity that causes her to see hallucinations. She is in the care of her Aunt Bel, one of the few Wickerton descendants who didn't succumb to the curse.
For some reason, Dresden's bees won't sting Essie. This fascinates him, and Essie is similarly affected as Dresden's presence calms her visions. But murders, the looming disaster, Essie's cruel father, and another paranormal being, the Strawman, complicate their relationship.
This is such a unique concept, and I loved the backstory. Essie and Dresden are both terribly burdened, yet strong together. The writing is lovely, alternating between the two. And the cover is just fantastic; I'd have bought the book for the cover alone.
If you're looking for a YA romance that's just a little different, invoking magic, danger, and ancient curses, you need to read Keeper of the Bees.


Link to Amazon
Posted by AntrimCycle at Friday, September 14, 2018