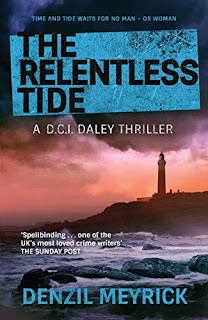 In the latest book in the DCI Daley series, Jim Daley and Brian Scott are thrown back in time to a previous serial murder case. The 'Grab o Grannie' case took place in the early 1990s with no solution to the murders. Now an archaeological team has found the bodies of the last three missing woman buried on a hill above Kintyre.
The book switches back and forth between now and the earlier time period, but melds the two storylines seamlessly. The contrasts (and similarities) between young Jimmy and DCI Jim  are interesting, especially if you've read the rest of this wonderful series. Jim's had a rough go in the last few books though Brian seems to be doing quite well. A lot of the other characters show up, including Hamish who has words of wisdom for Jim's toddler son, and they're always fun. Even some of the 'villains' from previous books show up; I didn't think I could dislike John Donald anymore than I already did, but he manages to overcome that hurdle here.
Mr. Meyrick's writing is wonderful, whether describing the Kintyre peninsula or in the dialogue of the various characters. Here's Hamish describing the frailties of man: 'They don’t feel pain the way us poor men dae. That’s a scientific fact, Mr Daley. They’ve no’ got the same number o’ nerves in the body – same as the ribs thing. If they could feel the full force o’ a summer cauld, by Jove, they’d no’ be calling it man-flu, or whootever it is they’re saying. Quite simple: where there’s nae sense, there’s nae feeling, and that’s a fact.’
The mystery is solid; actually, there's several different crimes, both in the earlier time period and now, but the plotlines weave together seamlessly to a cohesive whole that is ultimately satisfying to the reader. Now I must wait for the next Daley book.


Link to Amazon
Posted by AntrimCycle at Sunday, October 07, 2018