She's faking her amnesia to fool a very real killer. 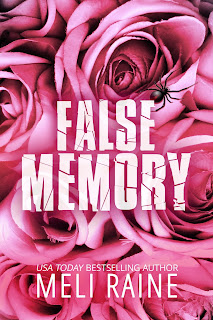 It all started with the bereavement flowers with my name on them.

Not the best way to wake up, right? I work in a flower shop. I know a funeral arrangement when I see one.

I know a killer when I see one, too. And one is standing in my hospital room right now, straight behind the man who saved my life.

I can’t tell anyone the truth, because that’s the fastest way to really die. So I do the next best thing. I “lose” my memory.

I fake my amnesia.

Pretending not to remember a brutal attempted murder has its perks. The killer is backing down, spending less time around me, loosening the noose.

The less I claim to recall, the more my rescuer, Duff, works to help me “remember.” I hate lying to him.

But he doesn’t understand that my memory is dangerous. To me. And to him.

Except it’s starting to look like I’ve been fooling myself.

In more ways than one.

Meli Raine writes romantic suspense with hot bikers, intense undercover DEA agents, bad boys turned good, and Special Ops heroes — and the women who love them. Meli rode her first motorcycle when she was five years old, but she played in the ocean long before that. She lives in New England with her family.

Posted by AntrimCycle at Saturday, October 13, 2018