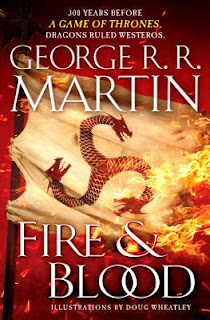 GRRM's Fire & Blood is a history of Westeros under the from Aegon I through the regency of Aegon III. This is NOT the Winds of Winter or anything like the Ice & Fire series. This is a history book which would non-fiction if Westeros was a real country. Think Ian Mortimer, Niall Ferguson, David Starkey, or other noted historians of the British Isles.
That said, I loved this book. The history of the is on with the Plantagenets except they have dragons. Martin has created such a rich and detailed world that he could write dozens of future books to expand on various people and events included as snippets here. Who wouldn't want to read more about the Red Kraken, the other sea voyages of , Saera Targaryen, and so on?
I love the way Martin incorporates 'sources' into his writing. He's very careful to attribute certain incidents to previously written histories of or the more dubious and bawdy memoir of Mushroom, the court fool. Like any historian, he must reconcile varying sources as he recounts various events.
Martin has always used bits of English history in his stories, and I had fun trying to decipher various characters and incidents from real history. He never copies directly (there are dragons after all) but sneaks little scenes into the story. I think I recognized the first and second battles of St Albans, Richard III's fatal charge at Bosworth, the Peasant's Rebellion, more bits from the Wars of the Roses. The war called the Dance of Dragons could well be the Anarchy (the civil war between Stephen and Matilda).  Aegon III's regency could from the minority of Richard II.
This is a book, and I could go on, but now, along with the Winds of Winter, I'm waiting for A Targaryen History #2.


Link to Amazon
Posted by AntrimCycle at Monday, September 23, 2019