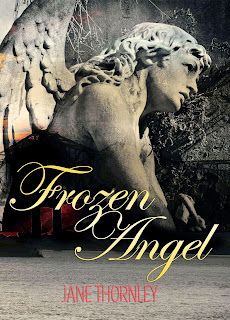 Blurb:
As a performance artist in New Orleans, Armelle plays a stone angel frozen to the spot to amuse tourists, but she is anything but still. The past shifts, the margins between centuries blur, and she is pitched into 18th century New Orleans, accused of treachery by a man dead since 1759.
And now her time lapses intensify, impacting her current life. Did she really make an indecent pass at her professor, shove a customer downstairs at the Bourbon Street bar? And where was she the night that customer died, since it was her purse found at the scene? Armelle desperately needs help but not from physicians or psychiatrists or any modern science. No, she has to convince everyone that the soul plays by different rules and can transcend place and time. Adrian, her own professor who she passionately loves, must understand that his rejection is based on a tragic event replaying itself over and over again, that they are tangled in time's web and must fight their way free.
Only Louise Dupre, her friend's Aunt Loo, can guide them. A phenomenal spirit in her own right, it is she who leads them back to New Orleans in 1756, when a young Acadian convent girl living amid the Ursuline nuns risks her life to save her city, and in so doing, unleashes a storm. As history claws its way into the present, Armelle must track her parallel self back through time and learn to change the future with her soul.
History, reincarnation, passion, and redemption stir the elements of this time travel tale of suspense, Frozen Angel.

"For the length of time that I was reading the book I suspended my critical judgment and enjoyed one of the best told stories I have read in a long time.
The plot of Frozen Angel is intricate, but all parts mesh in the end. The present is explained through insight into the past and every character is involved in both the past and present aspects of the story. And the characters-- wow! Thornley has a gift for developing complex, fascinating characters that compel not only your interest but your sympathy.Frozen Angel is a mystery and the suspense holds until the final page of the novel. It is a great read for someone looking to be caught up in a story that removes him or her from the everyday elements of his or her life and excites the imagination. It is a fun read that, fantastic as some of the plot seems, is written with intelligent precision and has the power to draw even the most skeptical reader. Like myself."

Once upon a time, Jane Thornley filled many roles--librarian, teacher, designer, school administrator, software consultant--but writer has always been her default self. She began writing stories in elementary school and completed 4 novels before graduating public education. But that was just the warm-up.
Today her fast-moving suspense blends intrigue, humor, and romance against a rich world interwoven with archaeology, ideology, history, and women on a quest for the ultimate truth.
Born in Nova Scotia, Canada, she continues as an art-to-wear knitwear designer and impassioned traveler, while weaving her stories against a colorful international backdrop so vibrant, readers constantly remark on it in reviews.
Posted by AntrimCycle at Friday, July 17, 2015