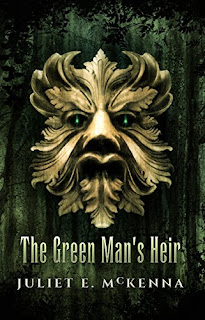 Daniel Mackmain is a woodworker and carpenter, currently working in Derbyshire. He's also a greenblood because his mother is a dryad. This gives him some special powers such as the ability to see other supernatural creatures such as dryads, naiads, wose, boggerts, and shucks among others. When he becomes embroiled in the murder of a young runaway, Daniel finds he is has been brought to Derbyshire for a reason by the Green Man.
If you are at all interested in English folklore, you will love this book. Set in modern times, the reader is still brought back in time to read of creatures who've been living in the woods and streams of England for centuries. You also get some English history thrown in (how was William Rufus killed in the New Forest?) and descriptions of English manors and villages that adds to the setting of the book.
The book is told in first person. I don't always like using that POV, but Daniel is an engaging character, still trying to work out his own ancestry and its implications while accepting the differences it has created for him. The other characters, both human and supernatural, are fun, and the evil ones certainly make the reader want to grab some iron and check the locks on their doors.
The writing style reminds me a bit of Charles de Lint or Patricia McKillip, two of my favorite fantasy writers, and readers of both would certainly enjoy this book in my opinion.
I hope this turns into a series. I'd love to read more about Daniel's adventures.
Posted by AntrimCycle at Sunday, April 22, 2018