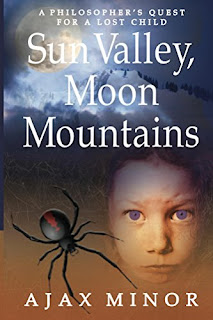 Jaq and Kate live in Sun Valley, Idaho. The past year has been hard for them as they lost their baby daughter, Ur, but they manage to keep on with their lives as best they can. Suddenly, they both start to suffer from visions or alternate realities, gripped by a certainty that something is wrong with Ur. Despite her death, Kate can hear her on the baby monitor and Jaq is chased by a giant black widow spider, then they experience other 'visions' together. They consult a friend, Father Nicholas Beele, who offers to guide them on a mystical journey to rescue Ur.

This is a fabulous story with strong elements of Babylonian mythology as well as touches of Hellenic lore, Christianity (both Old and New Testaments), some Grail legend, and some philosophy that all melds together into a cohesive tale. The first part of the book has some fantasy but is mostly involved with Jaq and Kate's everyday life and work. The second half of the book is portal fantasy as Jaq and Kate embark on a quest to an alternate reality, one designed in Jaq's mind.

The other world is called Luna, and it contains a mix of fascinating characters, some doppelgangers to their real world in Sun Valley and some original creatures. The worldbuilding is good, what a reader might expect from a place called Luna but with nice details such as "Littered haphazardly about the immense cavern were smaller lumps of crystalline rock and individual facets broken off from the mother stones, all glittering green against the gray basalt of the cave floor."

Jaq and Kate are interesting characters. They are suffering from the death of their child. Self-described as Stoics, Jaq self-medicates with gin and Kate cries at night like Niobe, hidden away from Jaq. Each display courage and a stern practicality in dealing with new reality they are thrust into. Since Luna is basically Jaq's world, it is populated with his heroes who step forward to give aid as needed.

Although this is at least partly the story of the loss of a child, I also think it is about birth. Ur symbolizes creation in mythology or the beginning of a civilization. Parts of the story are sad but there's also a strain of hopefulness that runs throughout the book.

I found it interesting that Jaq starts out thinking "there was no longer any magic in the world" yet is convinced by the end that "...it's not 'magic,' really. It's a point of view." He bases this on Hugh Everett's theory of the multiverse which has been used in fantasy and science fiction from Narnia to the Dark Tower. Here, Mr. Minor creates many mythic links that both intrigue the reader and stretch the mind. I think a reader would enjoy this book as a fantasy story, but the real wealth, I found, is in the details and symbolism sprinkled liberally throughout the book.

The writing flows easily. It reminds me of the style of Carlos Castaneda though there is no Yaqui shamanism in Sun Valley, Moon Mountains. The story is paced well; you get to know Jaq and Kate gradually and meet the multiple characters along the way (though there's a nice list at the beginning of the book if you need to keep them straight).

I enjoyed this book and would recommend it. The next book is already on my reader, and I'll be diving back into Ur Legends soon.

Link to Amazon
Posted by AntrimCycle at Thursday, April 19, 2018