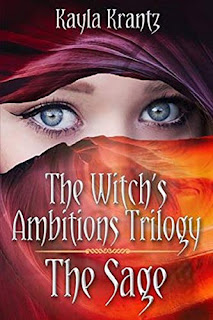 In the third book of the Witch's Ambitions trilogy, we find Lilith injured after the last battle. Now both her legs , and she can't walk. She's more information about her mother, none of it good. Meanwhile, a magical sickness is attacking the witches of Willow's coven and she finds she can't reanimate them.
I found this book a little slower in pace than the first two. There's one battle, but it's off-scene, so the story is mostly about the conflicts existing within Willow's coven and how Lilith deals with the various characters there. It's a good ending to the series which resolves Lilith's battle with the Council and gives hope to those left in the Land of Five.
The series is an interesting world of witches not like anything I've seen before. I liked the covens divided by their powers. The ultimate betrayal of the Sage, the witch who rules them all, and Lilith's resolve to overcome her makes for an interesting dynamic and a good read.

Link to Amazon
Posted by AntrimCycle at Monday, August 12, 2019