I usually only share reviews for Indie books, but on occasion, I will throw in a review of a book by 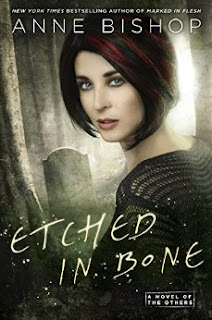 one of my favorite authors. Etched in Bone by Anne Bishop is the fifth and last book in The Others series, though I did hear there may be more books about Thaisia and its inhabitants.
This is a series that, at least in my opinion, needs to be read in order. The inhabitants of the Courtyard change subtly over the five books in various ways that culminate in Etched in Bone.
Meg Corbyn, the cassandra sangue, has mostly stopped cutting, suppressing the need by using her prophecy cards in lieu of the cutting euphoria. Things at the Courtyard have settled down; the Others and the humans are adjusting to living together after cataclysmic events of the previous books where the Humans First and Last movement tried to erase the terre indigene from all the lands.
The story builds slowly as Monty's brother 'Jimmy' and his family arrive to disrupt the fragile peace. While the other books dealt with bigger issues and movements, Etched in Bone is more about how this one bad apple can also cause destruction on a different scale. Jimmy is a grifter who mistreats his wife and children, takes advantage of his siblings and mother, and just generally causes trouble. Right from the beginning, the reader wants the Others to eat him, but Namid's Teeth and Claws make them accommodate him, wanting to learn more about this one human troublemaker.
The relationship between Meg and Simon Wolfgard has deepened. Meg is growing up, learning to deal with the real world after her years of confinement and Simon is patient while helping her adjust to new activities and changes.
There are some lighter moments; I especially liked the turkey hunt and the Elders asking for their treats. All in all, Etched in Bone is a satisfying conclusion to a wonderful series.


Link to Amazon
Posted by AntrimCycle at Wednesday, March 08, 2017