Book Review: The Rite of Wands by MacKenzie Flohr 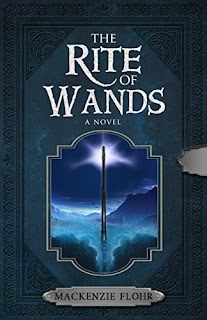 The Rite of Wands is interesting, a perfect fantasy book for MG and YA fantasy lovers. It is told in alternating points of view by Mierta McKinnon and Orlynd O'Brien, two young teens. Mierta goes through the Rite of Wands and sees a dark future for himself. Orlynd is brought to King Francis to act as his warlock.
Mierta is a potion maker, a skill that he uses to try to avoid his fate. Orlynd has visions though he can't always interpret them as quickly as he needs to. He is caught in the schemes of Anya, the woman who is brought to marry Francis's son.
The author is very good on detailing the environment in which the characters find themselves, helping the reader to visualize in great detail the surroundings of Mierta and Orlynd. I found the dialogue a bit stilted at times and I personally didn't like Orlynd's dialect. There's a glossary in the back to help interpret what he was saying, but I found his speech distracting and it kept taking me out of the story. Other readers may not have this issue. I'd also warn the readers that this has a cliffhanger ending.
I'd like to thank the publisher for providing me with a copy of this ARC. I did enjoy the story and I'm eager to see what happens next.