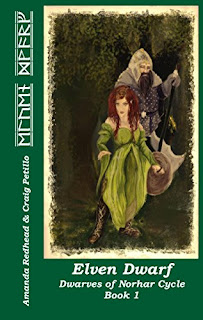 Aliaga is the daughter of a healer and a blacksmith, but Crugeon, the father, also know who to wield an ax and is a great warrior. She's also a dwarf, a member of the Norhar clan. The story starts when she is just a child and progresses from there. Not to give much of the story away, she is adopted by wood elves partway into the tale as her clan falls to disease and battle. So she is renamed Alluria and raised as an elf and thinks of herself as such.
As she gets older, her elven father worries about her finding a mate. When a dwarf named Heptos visits, he thinks he's found a perfect mate for Alluria.
Even before this, a demon has stolen a powerful talisman from the council at Druid's Stone though it won't work without a tome containing its spells. The tome is hidden away and various orcs, goblins, and other evildoers want control of both the talisman, a jewel, and the tome. Adventures ensue, battles are fought, and Alluria is right in the middle of it all.
This is a stirring tale in the vein of Tolkien's books. Neldorailin is a dense and rich world with a lot of characters of all the typical fantasy types, but here the authors have woven a tapestry of colorful characters. There are heroines and heroes, dragons, mages, goblin kings, and evil orcs. Some of the characters are quite funny and provide good comic relief. There is a lot of detail and names which are fine for the most part, this being a high fantasy book, but can slow the story down in places with a bit too much telling and not enough showing.
I look forward to more stories from Neldorailin and recommend this book to lovers of high fantasy.

Link to Amazon
Posted by AntrimCycle at Wednesday, March 29, 2017