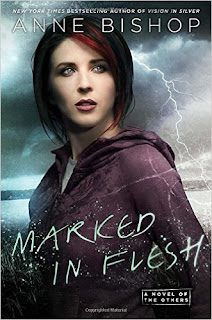 Marked in Flesh is the 4th book in The Others series. For all of the violence that takes place, in some ways this is the easiest story for Meg Corbyn. Meg is growing up and learning how to deal with her prophecies in new ways. Simon Wolfgard is learning  better how to deal with Meg and the human pack that belongs to her.
This story is about the culmination of the HFL's actions and it goes about how you would expect if you've read the other books. There are a lot of new characters introduced, most of whom are entertaining/interesting. I did miss Sam, Skippy, Father Erebius, the Crowgard, and some of the characters who didn't get as much of the story as in other books.
Since I just finished the story, I was quite struck by one passage that seems prophetic in our own world.
"Stavros had found this epiphany quite entertaining since it came in the wake of Scratch's final speech, in which the man stated he could not be held responsible for actions other people took because they misinterpreted his motivational speeches as a call to commit violence against the terra indigene. Every man should be held accountable for his own actions."
The parallels that Ms. Bishop is drawing with our own election cycle was quite striking to me. And appalling.
I love the series and this book was no exception. I can't wait for the next one. For anyone who hasn't read the previous three books, what are you waiting for?