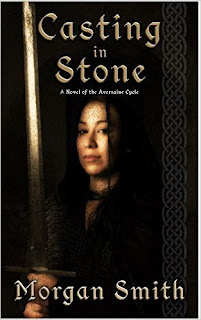 They said ill winds blew at her back. They said she was cursed, a hex, a jinx, a hissing in the dark. And it was true: everywhere she went, no matter what she did, misfortune seemed to follow in her wake. But that, of course, wasn’t the worst of it.
The evil that seemed to track Caoimhe throughout her life had caused so many tragedies. She fled her old life, trying to lose herself in anonymity , but the unholy circumstances of her birth, and the machinations of those who sought to use her existence to further their own schemes followed her still. Can she overcome a long-dead evil and finally be free?


Bio:  Morgan Smith has been a goatherd, a landscaper, a weaver, a bookstore owner and archaeologist, and she will drop everything to travel anywhere, on the flimsiest of pretexts. Writing is something she has been doing all her life, though, one way or another, and now she thinks she might actually have something to say.

An excerpt from “Casting in Stone”
He strode at me the way he always started a bout, using his bulk to reinforce his supremacy. His first shot would start with a feint to the left, it always did, he was good at it and I had had to find and practice a way to make it look as if only luck succeeded in making him miss that first punishing shot, wherever it came from. I skittered clumsily to the right, got slightly behind him and made him turn quickly.

It’s a problem for bigger fighters, having to maneuver. It throws them off their game. On a battlefield, your enemy is generally right in front of you and there isn’t any finessing it, but one on one, with no distractions, it’s a completely different tale. You need to be able to move and move quickly, and, accustomed to his opponents following his lead, he simply wasn’t used to it. I threw a tentative-looking blow towards his midsection as he came at me again, a shot I knew he could easily block, and then I hopped out of his range.

He started towards me again, this time with purpose. He was going to use his second trick, and try to force me off my feet by virtue of his weight, which was considerable. I danced away and ended up behind him again, and he stumbled, a little, as he turned.

His brow was furrowed, puzzled now, and just a little bit wary. I couldn’t afford that, it was too soon, and I had to get him back to a place where his arrogance would make him commit to something risky. I swung wildly, missing by a mile. He grinned, any momentary doubts erased. He was sure, now, that he had my measure.

He moved back a half-step to adjust the distance and I let him. I knew exactly what I needed to do. I moved sideways fast, tracking his sword, and let him strike.

I felt the blow, as the tip of his sword slid past and under my shield, robbed of most of its force by my meeting it sooner than he wanted. I’d misjudged the angle by a hair, but I was now as committed as he’d been and he let his shield drop away a little as he began to step back, as so many fighters will when they’re sure they’ve hurt you, and he was still smiling.

I was moving with him, inside his range and further, and my sword sank in, deep into his chest, and I pressed it all the way home.

He was already dead when I pulled it free.
Posted by AntrimCycle at Saturday, March 26, 2016