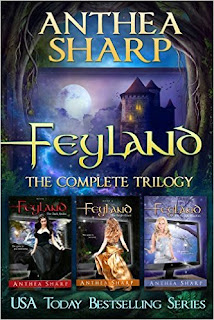 
The Feyland trilogy is an urban fantasy by Anthea Sharp that merges tales of fairies with computer gaming. It is set in a future with g-boards in place of skate boards and wrist chips implanted in rich people's arms.
Jennet Carter is one of the rich kids who has moved to Crestview with her father who is the program manager for a new immersive Sim game called Feyland. His best friend, Thomas, is the lead programmer. Jennet is the first to play the prototype and she finds out right away that it is more than a game. She goes through a portal into the Dark Realm where she battles the Dark Queen and loses part of her essence. She needs to get it back or she will die, but she needs help.
Tam Linn is the best sim gamer around, but he comes from the poor section of Crestview, commonly called the Ex. He doesn't trust Jennet, but he is fascinated by her. Eventually, he agrees to help her. He is hiding his own secrets, a mother who is often lost to drugs and he has the responsibility of his younger brother, called 'the Bug'.
Tam and Jennet battle the Dark Queen of the Unseelie court in the first book of the series. The story is based off the old Scottish ballad called Tam Lin who has to be rescued by his true love from the Queen of the Fairies.
The second book, The Bright Court, has Jennet and Tam struggling to close down the portal and stop the release of the game, else the Fey will be released on humankind. The CEO of the gaming company has a son who has also been playing the game, but he allies himself with the Bright Court of the Seelie king. Jennet and Tam must battle in Feyland while still contending with their everyday efforts in school and homelife.
The third book, The Twilight Kingdom, tells of the final quest against the united courts of the Dark Queen and the Bright King. Jennet and Tam are now part of beta team meant to test the game before its release. They are desperately trying to stop it as the Fey world starts to bleed into their own human world.
Ms. Sharp uses a lot of themes of Celtic mythology and lore in this series. Puck, the Wild Hunt, and changelings are just some of the characters introduced in parts of the story. She does so masterfully, combining the game with these elements in a way that never strikes a false note. I heartily recommend this series as well as the additional books she's written about some of the other characters she created for this series.