New Release: A Madman's Lectures on Humanity by Nicholas Powell

"When I was younger, I tended to stay quiet about my own problems or romanticized the problems so people wouldn’t worry. Feeling worthless and the only people you know enforcing those thoughts didn’t help much to be honest. I tried once to tell people about when I was hurt and broken. I gave them my shattered heart, told them I was broken, showed them my bleeding wings, and gave them every chance to help me like I helped others. Instead of helping they shattered the remains of my crystal heart, held me against the ground, poured Vaseline on my bleeding wings, and they lit them ablaze until the very feathers were nothing more than crimson ashes and splintered bone. Tell me madmen, where were you then? "

'A Madman's Lectures On Humanity' is a poetry anthology consisting of over 120 poems along a wide range of topics including depression, humanitarianism, anarchy, regret, love, hopelessness, and loss.


Release Date is March 22nd, but you can pre-order here: Amazon

Check out his website where you can order a limited print Handbound Hardcover version!

Nicholas was born in Attleboro, Massachusetts. He's since moved to Gardner Massachusetts and currently is attending Mount Wachusett Community College towards his associates degree. 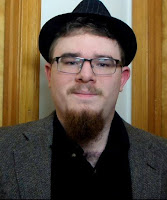 Nicholas Powell first began writing at the young age of thirteen. Eager to learn from the world that surrounded him, he was often the 'voicebox'; the one who people came to when they needed to talk to someone. Even at a young age, he would often give advice to the people who came to talk to him about their problems, while having no one to talk to about his own. This, combined with his writing talents drove him to become more acute about his surroundings, often figuring things out far before his peers. After being hurt by people close to him, he decided to turn the fun hobby of writing into something more formal and serious. He was often ignored when he spoke about the people who abused him or hurt him, so he took to the writing as an escape. By the age of 16, he compiled over 150 poems. By the age of 18, he had compiled over 250.

In 2015, some his poetry was put in a compilation along with other poets into a book entitled 'Soul Stains'. His love for literature went later into submitting poems to multiple magazines he found "Intriguing". Eventually, one of his works was accepted by PearTree Press for their 13th issue of 'The Literacy Hatchet' later in 2015 with the poem 'A Youthful Old Soul'. Despite his attachments into literature and writing, he considers himself a "...Man of many hats...".

He has delved his hands into different careers, from boutique computer construction to carpentry, and encourages others to "explore the interests around you. Not necessarily to master them, but to understand them."
Posted by AntrimCycle at Friday, March 18, 2016