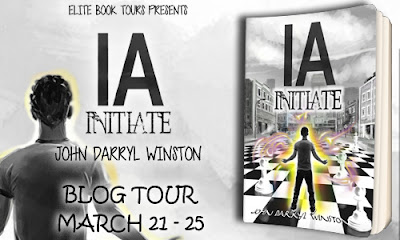 Welcome to my tour stop for "IA: Initiate" by John Darryl Winston.  This tour runs from March 21 to 25.  Please refer the tour page for the full list of bloggers who are participating in this tour. 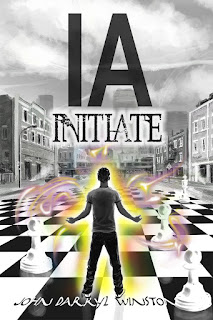 IA: Initiate is origin story and a hero’s journey that follows thirteen-year-old orphan Naz Andersen and his nine-year-old sister, Meri. They live in a present day alternate Detroit/Chicago-like city known as the Exclave where they are surrounded by poverty, gang violence threatens every corner, and drug dealers rule the streets. Naz thinks he is ordinary except that he hears voices, has nightmares, and walks in his sleep.

The most important thing in the world to Naz is protecting Meri and getting her out of the Exclave and into the prestigious International Academy. But Naz has a secret, one that he is oblivious to, and only Meri knows. When Naz becomes the target of a notorious street gang he begins to discover the voices in his head, the nightmares, and sleepwalking are actually telekinesis and telepathy at play, a gift from his father of whom he has no memory.

Now, standing in the mirror, he studied himself as he picked up his toothbrush with one hand and the tube of toothpaste with the other. As he fumbled with the toothpaste, he looked down and noticed that there were more things on the bathroom sink than there were on his bedroom nightstand, and his temper flared again.
“They were my things,” he said, once more looking at the bathroom door. “My things!” Then he let it go at that.
He put some toothpaste on his toothbrush and began to brush his teeth. Yes, there was something different today. As he brushed his teeth and studied his reflection in the mirror staring back at him, he noticed, out of the corner of his eye, that the tube of toothpaste he had put down was rising again in his reflection, but this time on its own. What was even stranger was that the toothpaste, which he saw hovering in midair next to his face, did not seem all that odd to him.
In the back of his mind he could hear his mother saying something, but between brushing his teeth, the water running, and the suspended toothpaste, her words stayed right there—in the back of his mind.
Again in the mirror, he noticed on the other side of his head that a bar of soap was mimicking the toothpaste, and it began to amuse him. He smiled and began to twist his hair with his free hand. He decided to step back and take it all in, when he noticed that he could not feel the floor, or at least he wasn’t standing on it anymore. He, along with the soap and toothpaste, was suspended in midair. And if things weren’t interesting enough, he noticed a bottle of mouthwash floating by on its side, and in the mirror a towel sailing just over his head.
He became concerned when he heard a rumbling sound growing steadily in the distance and making his mother’s words through the closed bathroom door even more indistinct. It finally dawned on him, it’s an earthquake, and fear began to overtake him for the first time. An earthquake? No, never in the Exclave … a tornado, which would explain that rumbling sound getting louder. He had heard about tornados before but never experienced one. Is this what it’s like … slow motion and things floating all around you? Momma must’ve been trying to warn me, direct me to safety. Is it too late for me to take cover?
He began to panic, and his mind raced, but all about him was in slow motion. He quickly reached for the door, or so he thought, but it was as if his mind and body were separate, and when he looked at his hand, it seemed like minutes went by as it traveled to reach the doorknob. When his hand finally reached the doorknob, he turned it and kept on turning it round and round. It spun around as if broken. He decided just to pull the knob, but the door wouldn’t open. He tried a second time and then a third. He tried to pull it with all his might, but the door still would not budge. It wasn’t locked, but he figured, somehow with all that was going on, it must’ve gotten jammed.
He began to yell, “Ma … Ma … Ma!” But he couldn’t hear the sound of his own voice, even though the rumbling sound that now resembled that of a train didn’t seem loud enough to drown it out. He continued to yell, “Ma … Ma … Ma!” and wondered if she had given up on him.She wouldn’t have left me here, would she? She wouldn’t have left me here to … to … unless she had good reason … a really good reason.
After wrestling with the door for what seemed like an eternity, he let go of the doorknob and noticed the floor coming apart beneath him. Feeling gravity return and take him down with, and through the floor, he tried to grab the doorknob once more, but it was too late. As he plummeted below, he noticed seven distinct shadowy figures. He closed his eyes and braced for impact. 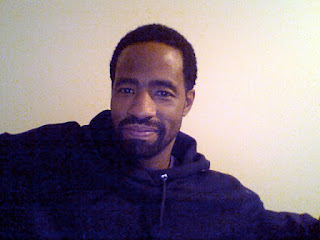 John Darryl Winston is a recording artist, turned educator, turned author. He dates his love of storytelling back to reading the bible with his father and sisters and later when he first saw Superman The Movie as an 11th grader in his high school auditorium. He got the idea for his debut series while piloted a Boys’ Read program as a Detroit Public School teacher. He is the founder of the Adopt an Author program, which has as its mission to create an atmosphere where boys and girls learn to love reading and writing.

He has written songs with and for Grammy winner David Foster and record mogul Clive Davis. He has been a recording artist on Arista and Polygram records, and has written and/or produced songs for Gerald Levert, Jordan Hill, Gerald Alston, and many others.

He’s a graduate of the Recording Institute of Detroit, The Motion Picture Institute of Michigan, and Wayne State University. He has his MA in Creative Writing from Wilkes University and will be graduating, June 2016 with his MFA in Creative Writing from Wilkes. He lives in Detroit with daughter, Marquette and plans to buy an African Grey Parrot when he conquers his irrational fear of birds and name him or her Tony or Toni.

John is offering ecopies of IA: Initiate to the 5 winners of the below Rafflecopter.